[This article was the Featured Property from the BLCT Winter 2019 newsletter. If you would like to receive our quarterly newsletter in the mail, please sign up here.]

Allin’s Cove is a testament to the ability of the natural world, with help from environmentalists, to heal itself and provide a valuable place for wildlife to co-exist with humans.

Tucked into the northwest corner of Barrington, the Allin’s Cove Conservation Area consists of about 10 acres of property surrounding a tidal cove that facilitates the drainage of the Annawamscutt Creek into Narragansett Bay. From the early 1900’s until the 1990’s, Rhode Island Lace Works and other manufacturing facilities operating in Bay Spring Village pumped pollution from dye vats and other sources directly into Allin’s Cove. As a result, a variety of heavy metals settled into the tidal flats of the Cove. Beginning in 2003, the U.S. Army Corp of Engineers conducted a project intended to relocate the channel in the Cove and restore the salt marsh.

Today, the Conservation Area consists of marsh, grasslands and wooded uplands. Although invasive Phragmites are prevalent, native coastal grasses, shrubs and trees can be found in the uplands and buffer areas. Plants found in the salt marsh include two different species of Spartina cordgrass, sea lavender and glasswort. The Cove supports a large variety of aquatic species, including small fish, crabs, and various types of shellfish. A large number of birds, including raptors, song birds, and aquatic birds such as ducks, heron, swans and osprey, call Allin’s Cove home on either a seasonal or full-time basis. Mammals ranging from mice, squirrels and rabbits to coyotes, foxes, and deer inhabit the uplands and buffer areas. Once in a while, during the late winter, a seal will haul out on the beach.

BLCT is responsible for managing the Allin’s Cove Conservation Area, various parcels of which are owned by the Trust, the Town of Barrington and the State of Rhode Island. BLCT’s management plan was developed with the input of a wildlife biologist employed by the Natural Resources Conservation Service. The primary management strategy is to control the growth of invasive plants such as Phragmites, Japanese knotweed and multiflora rose so that they do not crowd out native plants that provide habitat and food for birds, mammals, butterflies and bees. This strategy involves removing invasive plants, planting native grasses and cutting milkweed plants to encourage new shoots on which monarch butterflies can lay their eggs. In other areas, the recommended approach is to mow the area in a manner intended to promote diversity in the landscape and prevent the uncontrolled growth of Phragmites. Other management goals are to facilitate the growth of the marsh and to monitor and maintain erosion control measures.

Allin’s Cove may be accessed for purposes of passive recreation from Narragansett Avenue, Third Street and Willow Way. In addition to being a peaceful place to walk and observe a wide variety of plants and animals, it has a wonderful view of the sunsets across Narragansett Bay. If you go there, take a moment to appreciate the positive effects of saving and rehabilitating the wild places within our midst.

Click on the thumbnails below for more awesome pictures by our own Robert Puckett. 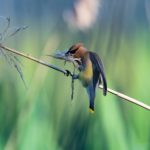 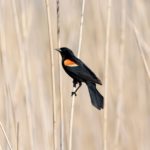 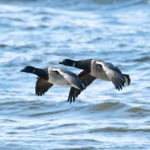 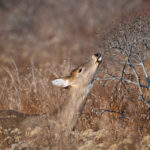 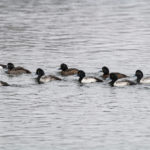